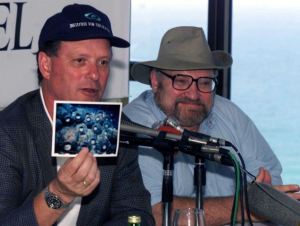 Undersea researcher Robert Ballard (L), who found the Titanic, holds June 23 a picture of ancient jugs found off the coast of Israel in the wreckage of two Phoenician ships lost in a storm around 750 BC, the oldest vessels ever discovered in the eastern Mediterranean deep sea. Looking on is Ballard’s colleague Lawrence Stager, (R), of Harvard. The ships are to be the subject of the National Geographic Channels first-ever Israeli film project. hl/Photo by Havakuk Levison REUTERS