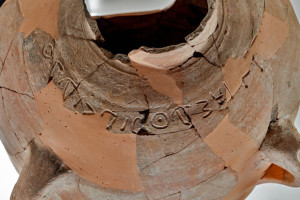 This undated photo released by the Israel Antiquities Authority, shows a 3.000 year old ceramic jar with inscription of a name mentioned in the Bible,Eshbaal Ben Beda. Israels antiquities authority says archaeologists have discovered a rare 3,000-year-old inscription of a name mentioned in the Bible. Eshbaal of the Bible was a son of King Saul. Archaeologists said Tuesday, June 16, 2015 it is the first time the name was discovered in an ancient inscription. It is one of only four inscriptions discovered from the biblical 10th century B.C. Kingdom of Judah, when King David is said to have reigned. (Tal Rogovski/Israel Antiquities Authority via AP)