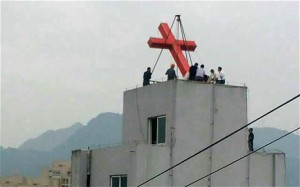 Officials in Zhejiang Province have taken down 1500 crosses so far from Church buildings in a nationwide crackdown on human rights attorneys and advocates.

Christians in China are holding on to crosses or strapping on to crosses in a bid to stop the demolition. Many Christians are building wooden crosses and painting them red and putting them on top of houses. Chinese Christians have also started praying in large numbers to stop government from these violent crackdowns.

Meanwhile, United States Representative Chris Smith with regard to this issue stated, “The freedom of religion is the key human right. It is clearly the first freedom from which all other flow. It allows each citizen the precious right to follow their conscience peacefully and without fear. It protects the critical part of who we are as human beings—to seek, to speak, and to act out our fundamental beliefs. When this freedom is protected the very well-being of society is enhanced. No government should deny or suppress this essential claim to conscience. The reality is that governments and terrorist groups do restrict the freedom of religion, sometimes in the most brutal and public ways. The freedom of religionis under siege in many places of the world, including in China which is the subject of today’s hearing.”

Chris also added, “It has been a punishing year for China’s diverse religious communities.”

Posted by By Gospel Reporter November 4, 2014